"Thank you Minnesota for showing up and making this happen! YES, WE CAN CHANGE THINGS WHEN WE WORK TOGETHER! LET'S LET EVERYONE KNOW THAT OUR VOICE COUNTS!" - Right Now MN. 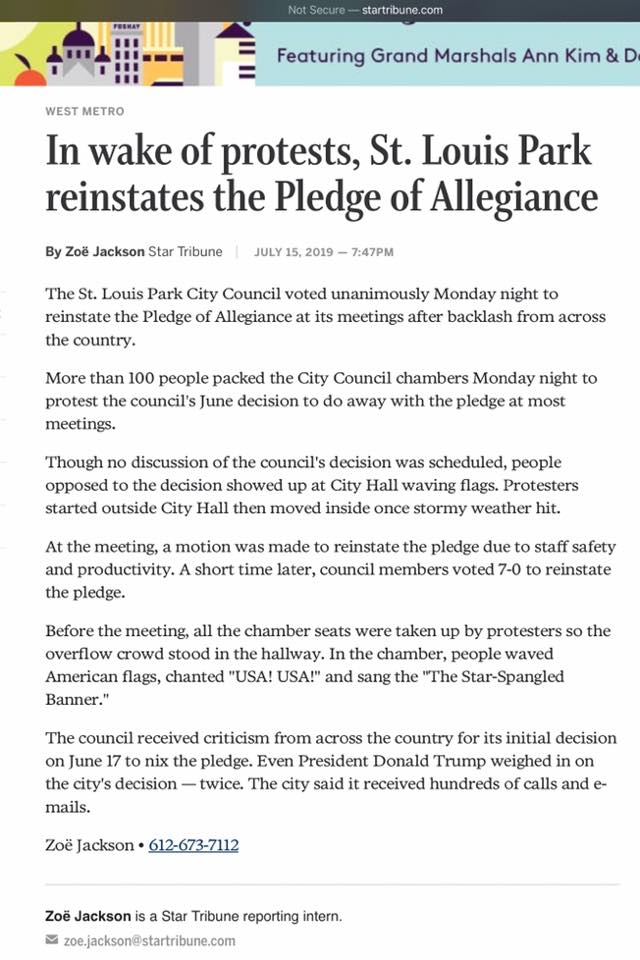 The St. Louis Park City Council voted unanimously Monday night to reinstate the Pledge of Allegiance, saying the firestorm of criticism over the issue has taken a toll on the staff and kept the city from doing its work.

More than 100 people packed the City Council chambers Monday night to protest the council’s June 17 decision to do away with the pledge at most meetings. A similar protest took place last week.

The pledge was not scheduled to be discussed Monday night, but Council Member Thom Miller made a motion to reinstate it because the city has been inundated with e-mails and phone calls, some that Miller believed endangered city staff and residents.

“There are many from outside of St. Louis Park who are abusing and harassing our city staff, making it very difficult for them to serve the residents and businesses in our city, which is the very reason our local government exists,” he said at the meeting.

Some residents were there to support the council.

Kirsten Brekke Albright has lived in St. Louis Park for more than 20 years. She and other residents felt that it was time for the council to get back to more important work.

“Frankly, this is a distraction. It saddens me that it’s gotten the national attention of mindless, but very effective, agitators and organizers,” she said, adding that she was comfortable with the initial decision to nix the pledge.

Marni Hockenberg of Rose­ville said the protesters believe the council’s initial decision was another freedom “being taken away from us bit by bit.”

“Why take that right away from other Americans who are really proud to be united and indivisible in one nation?” she said. “I think the Pledge of Allegiance celebrates our diversity, that we’re all united.”

Hockenberg and other protesters took up most of the chamber seats. A large overflow crowd stood in the hallway.

People who supported the council sat up front, with some holding signs that read, “You are welcome here.”

The council received criticism from across the country for its initial decision. Even President Donald Trump weighed in on the city’s decision — twice.

The city said it will return to saying the pledge before regularly scheduled council meetings, twice a month.