DOES THE TERM NARCISSIST FIT HERE?

"The voters of Minnesota need a little education to figure this one out! When you vote without checking out the person who is running, here is a great example of what can go WRONG!" - Right Now MN.

Read the full article below. 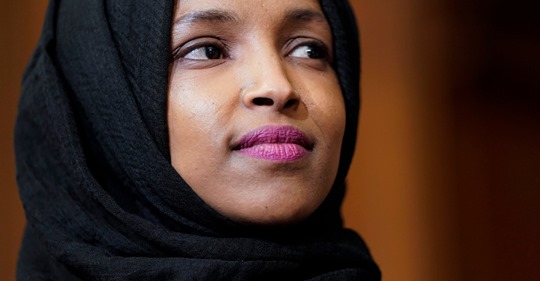 Rep. Ilhan Omar blamed the US for the political turmoil in Venezuela, saying we “helped lead the devastation” through the use of sanctions.

“A lot of the policies that we have put in place has kind of helped lead the devastation in Venezuela and we have sort of set the stage for where we are arriving today,” the Minnesota congresswoman said during an interview Wednesday with Democracy Now!. “This particular bullying and the use of sanctions to eventually intervene and make regime change really does not help the people of countries like Venezuela and it certainly does not help and is not in the interest of the United States.”

The freshman Democrat added that there are “finally” members of Congress who agree with what she said.

Later in the interview, she also reiterated criticisms of Elliott Abrams, the US special envoy to Venezuela whom she sparred with at a House Foreign Affairs Committee hearing in February.

“People like Elliott Abrams, neocons and warmongers, you know, for so long have pushed for policies that are now — we can see, not only in Central America, but many parts of the world, the kind of devastations that they’ve had for decades,” Omar said.

At least one top Republican called for Omar’s resignation over her comments, the latest in a string of controversial remarks she’s made since taking office.

“Ilhan Omar’s response to Venezuela’s murderous dictator? 1) Refuse to support global coalition backing Guaidó 2) Back the socialist regime 3) Demonize US aid Now she’s blaming AMERICA for the crisis. She should be removed from the Foreign Affairs Cmte,” tweeted Ronna McDaniel, the chair of the Republican National Committee.