"WHEN 'IHAN OH NO, I MARRIED MY BROTHER OMAR' DEFENDS THE ENEMY OF OUR ALLIES IN ISAREL, where does THAT PUT HER RELATIONSHIP WITH MINNESOTA CONGRESSMAN DEAN PHILLIPS? How about with all the Jewish people in Minnesota and the Christians? Please help us educate our voters by SHARING AND LIKING Right Now MINNESOTA!" - Right Now MN. 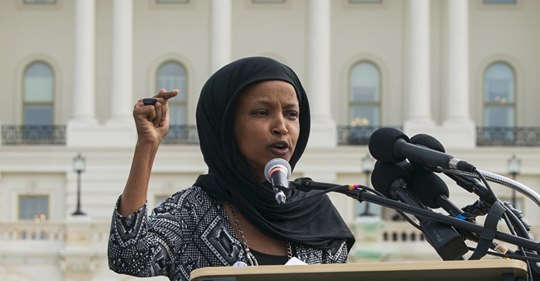 Rep. Ilhan Omar appeared to take the side of Hamas and Palestinian Islamic Jihad Sunday night after terrorists fired hundreds of rockets at civilian targets in Israel this weekend.

“How many more protesters must be shot, rockets must be fired, and little kids must be killed until the endless cycle of violence ends? The status quo of occupation and humanitarian crisis in Gaza is unsustainable. Only real justice can bring about security and lasting peace,” the Minnesota Democrat said in a tweet Sunday night.

A pregnant Palestinian woman and her infant niece were among those killed but the Israelis said a misfired Palestinian rocket — not an Israeli airstrike — caused those deaths, disputing a Gaza Health Ministry statement that Israel was to blame.

“Once again, Israel faces a barrage of deadly rocket attacks by terrorist groups Hamas and Islamic Jihad. We support Israel 100% in its defense of its citizens,” Trump said on Twitter Sunday. “To the Gazan people — these terrorist acts against Israel will bring you nothing but more misery. END the violence and work towards peace - it can happen!”

Omar’s criticism of Israel and support of Palestine follows a long history of comments many have characterized as anti-Semitic. After her election in 2018, Omar had a 2012 tweet resurface in which she said Israel had “ hypnotized the world.”

Earlier this year, Omar said the American Israel Political Action Committee was bribing members of Congress to be pro-Israel. She later apologized for the comment calling it anti-Semitic.

In February, Omar was criticized for playing on the anti-Semitic trope of dual-loyalty of Jewish Americans in a discussion of progressive issues at a panel event discussion.

"I want to talk about the political influence in this country that says it is OK for people to push for allegiance to a foreign country. I want to ask why is it OK for me to talk about the influence of the NRA, of fossil fuel industries or Big Pharma, and not talk about a powerful lobbying group that is influencing policies?" Omar said at a Busboys & Poets town hall. Omar refused to apologize for the comments, doubling down a few days later.

“I should not be expected to have allegiance/pledge support to a foreign country in order to serve my country in Congress or serve on committee,” Omar said on Twitter. “I am told everyday that I am anti-American if I am not pro-Israel. I find that to be problematic and I am not alone. I just happen to be willing to speak up on it and open myself to attacks.”

Omar has continued rhetoric Jewish leaders have called anti-Semitic since her initial apology, refusing to back down even as her own Democratic leadership has denounced her comments.

Rep. Rashida Tlaib, D-Mich., a close ally of Omar’s in Congress, went after the New York TimesSunday accusing them of “dehumanizing our Palestinian people who just want to be free.”