"'TAXING TIMMY' needs MORE of your HARD EARNED DOLLARS to finance Minnesota’s LAWSUIT AGAINST PRESIDENT TRUMP'S EFFORT to protect OUR BORDERS. Do YOU like paying for THIS? WE DON’T! PLEASE share so other taxpayers know WHERE THEIR MONEY IS BEING SPENT! Do you really want to spend your money suing President Trump?" - Right Now MN. 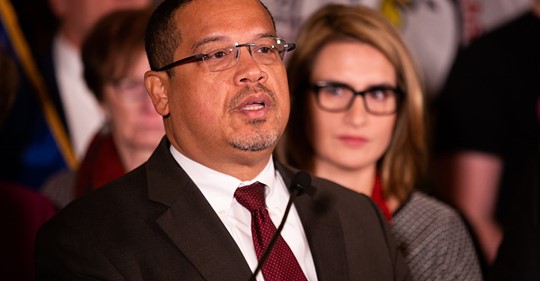 Minnesota and 15 other states, led by California, filed a lawsuit Monday against President Trump's emergency declaration to fund a wall on the U.S.-Mexico border.

Attorney General Keith Ellison announced that Minnesota was joining the multistate lawsuit to enjoin the Trump administration "from illegally and unconstitutionally diverting federal funds to build a wall along the United States southern border that President Trump announced in his emergency declaration on Friday, February 15," according to a press release.

"President Trump, who has been unable to persuade Congress and the American people that a wall is necessary, is harming the people of Minnesota by forcing this constitutional crisis. I have joined this lawsuit because I cannot allow him to do that," Ellison said in the release issued Monday night.

He says federal money designated for the Minnesota National Guard would be at risk, challenging efforts to intercept drug trafficking and respond to natural disasters.

"President Trump treats the rule of law with utter contempt," Becerra said. "He knows there is no border crisis, he knows his emergency declaration is unwarranted, and he admits that he will likely lose this case in court."

Trump declared a national emergency to fulfill his promise of completing the wall.

The move allows the president to bypass Congress to use money from the Pentagon and other budgets.

"President Trump is manufacturing a crisis and declaring a made-up 'national emergency' in order to seize power and undermine the Constitution," said California Gov. Gavin Newsom in a statement. "This 'emergency' is a national disgrace."