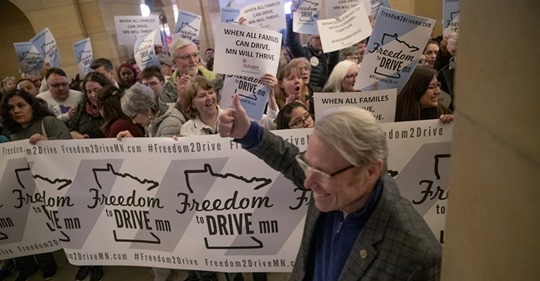 The Democratic-led Minnesota House voted Friday to give immigrants the ability to get driver’s licenses even if they are in the country illegally, setting the stage for a potential clash with Senate Republicans who argue that the change rewards those who break the law.

“Immigrants, whether they are documented or undocumented, are Minnesotans. They are part of the fabric of our communities,” said House Majority Leader Ryan Winkler, D-Golden Valley. “It is time that we helped take away this shadow of not having a driver’s license.”

The 74-52 vote was a victory for the DFL House majority and Democratic Gov. Tim Walz, who have made it a top priority for this session. But it faces strong opposition in the Republican-controlled Senate, where some conservatives see it as an invitation to illegal immigration and possibly even fraudulent voting.

Sen. Bill Ingebrigtsen, R-Alexandria, said the proposal would set a “dangerous precedent” and “undermine our current laws.” “Minnesota shouldn’t be in the business of incentivizing illegal behavior, and by allowing illegal and undocumented immigrants access to driver’s licenses, that’s exactly what our state would be doing,” he said.

Senate Majority Leader Paul Gazelka, R-Nisswa, has called the chances that the bill would pass his chamber “small.”

If the measure were to clear the Minnesota Legislature, still a distant prospect, the state would become the 13th in the nation to provide licenses to residents who cannot prove legal status, fueling the national debate over immigration and access to social benefits.

The Minnesota Voters Alliance and other conservative groups that favor stricter voter ID laws have cast the measure as part of a liberal effort to undermine the integrity of elections, a charge that DFL lawmakers denied. Minnesota has no photo ID requirements at polling stations, and the licenses mandated in the House bill would carry explicit warnings that they can’t be used for voting.

Immigrants, regardless of their status, previously were able to obtain licenses in Minnesota if they could pass the driver’s test and buy insurance. That changed in 2003 amid heightened security measures taken across the nation in response to the 9/11 terrorist attacks. The House bill would restore that right.

Supporters say the change will lead to safer roads and let the estimated 95,000 immigrants who are in Minnesota illegally live and work with dignity.

“It’s common sense,” said Rep. Samantha Vang, D-Brooklyn Center. “This will allow people to simply open a bank account, to drive safely on the road to their jobs, to their school.”

Opponents argued that the focus should instead be on fixing the legal immigration system.

“My perspective is that we want immigrants coming here legally and [to] create a ladder to the middle class,” said Rep. Glenn Gruenhagen, R-Glencoe. “Incentivizing people to come here illegally defeats that purpose.”

Democrats sought to address GOP concerns about possible voter registration fraud by accepting a Republican amendment to move a “not for voting” label from the back of the license to the front. The measure also requires that election officials and judges be informed that the licenses can’t be used to register voters.

While Republicans, led by the Trump administration, have sought to highlight the danger of illegal voting by immigrants who are in the U.S. illegally, election officials nationwide report that attempts to vote illegally — a felony offense in Minnesota — are rare.

“Trying to vote is not on the minds of undocumented Minnesotans right now,” Winkler said. “Going to work, going to school, trying to live their lives under difficult circumstances is what they are focusing on.”

Friday’s vote came after nearly five hours of highly charged, emotional debate, as members shared stories from constituents and, in some cases, their own immigrant experiences. Rep. Mohamud Noor, whose family came to the United States after fleeing war in Somalia, cast the bill as a “moral obligation.”

That message was echoed by hundreds of supporters who filled the Capitol rotunda ahead of the vote. The rally included immigrants, religious leaders and St. Paul Police Senior Cmdr. John Lozoya, who said requiring more people to learn driving laws and get insurance will make roads safer.

Those arguments resonated with Rep. Dave Baker, one of two Republicans who voted for the bill. Baker said while he had concerns with the proposal, he sees ensuring people drive safely as “really important.”

“My men and women in the uniform are looking for some help,” the Willmar Republican said. “They want something that’s consistent.”

The other Republican backer was Rep. Rod Hamilton, R-Mountain Lake, who gave an impassioned speech about his change of heart on the issue because of experiences he’s had with immigrants and his belief that the GOP must do more to earn support and trust from Minnesota’s growing immigrant communities.