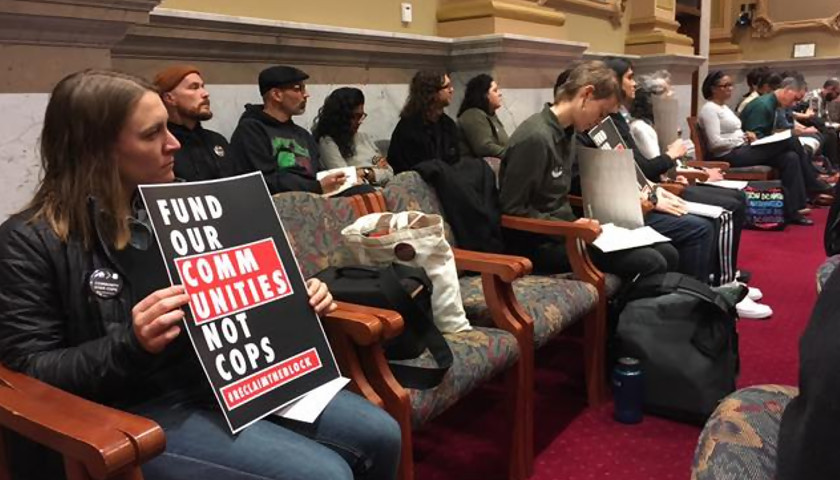 An organization called “Reclaim the Block” is circulating a petition that calls on the Minneapolis city government to “divest” from its police force.

The group describes itself as a “coalition to demand that Minneapolis divest from policing and invest in long-term alternatives.” They released a petition Monday that demands Minneapolis officials “invest in real safety solutions like violence prevention, housing, responses to mental health and opioid crises and protections for workers instead of 14 more cops.”

“As members of the Minneapolis community, we know that access to housing, youth services, harm reduction, and protections for low-wage workers help keep our communities more safe and more stable” the petition states. “For too long, our city has not prioritized the safety of our most marginalized community members: black, indigenous, and people of color; immigrants; and LGBTQ community members. Instead, the city has continued to invest in policing, a system making the problem worse.”

Reclaim the Block’s petition goes on to criticize the Minneapolis government for increasing “its police budget each year, without putting even a fraction of those resources toward solutions that really work.”

“We deserve a city that funds the ways we take care of each other. We need a city that prioritizes all of us,” the petition concludes.

Frey’s August budget address was disrupted by anti-police protesters, who shouted “you’re fired” and “resign” when the mayor announced the 14-officer increase.

“Population up, sworn officers stagnate. That’s not a sustainable metric,” Frey said, as The Minnesota Sun reported. “There is no time to waste on false choices and binary options in addressing the causes of crime and violence in our city.”

Several portions of Frey’s speech were difficult to hear over the noise of the protesters, who at one point chanted the name of Jamar Clark, an African-American man who was shot and killed by Minneapolis police.

“We need safety beyond policing, but we still need police,” Frey said and was booed by the audience.